From Wikimini
Jump to: navigation, search 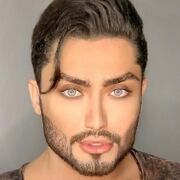 Alireza Kohany (Persian: علیرضا کهنی‎‎, born 18 June 1993, Tehran, Iran) is a musician; actor, author entrepreneur and expert in influencer marketing. He has managed to attract many fans in social media. His online books about business are very popular, He is also active in the field of music, and the remixes of his music have many fans.

He collaborated with brands such as Novin Charm, Iran Jam, Tak-Coat, PersianKala, Digi Magazine, Castrol, and Best Men's magazine in 2011, He also has shots in the catalog of these companies.

In 2011, he collaborated with Novin Charm and Ralp Lauren, Hakupiyan in the Iranian Fashion Week; And he received the award for the best man of the year from the magazine of the most stylish men in Iran.

His music career started with the "Best Remix" EP Album released in August 2013. Available in 10 versions.

In 2005, he entered the cinema with his role in the movie "Kheili Door, Kheili Nazdik" directed by Reza Mirkarimi. He also co-produced the soundtrack for "Sargijeh" directed by Mohammad Zarrin Dast.

Alireza Kohany is well-known for his marketing expertise in Turkey. He started off in the business of import and export. His offices are based in Turkey and he has investments in the real estate as well.

He reflected on the experience of changing locale to pursue revenue:

“After moving to Turkey, I had made my mind to make money in a short period. I kept myself open to any business opportunities which would give me good financial returns. That’s when I thought to keep my work of marketing aside and focus more on minting money”

He often worked as a freelance digital marketer for many leading organisations in Turkey and eventually started his own influencer marketing company.

He is a social media marketer and web expert with advanced knowledge in computer engineering.