From Wikimini
(Redirected from Einstein)
Jump to: navigation, search 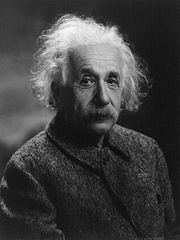 Albert Einstein
Albert Einstein was a physicist, born German in 1879. When he died in 1955, he had Swiss and American dual nationality.

He is known for his famous E=mc² equation (energy is equal to mass multiplied by the speed of light squared). He was also indirectly at the origin of the nuclear bomb that was used against Japan at the end of World War II.

He received the Nobel prize in Physics in 1921 after an explaination of the photoelectric effect.

He is the inventor of the theory of relativity (general and special).

Some authors of studies about Albert Einstein think he may have been dyslexic. What is certain is that Albert Einstein showed a mix of weaknesses in some areas (like word and text memory) and great strengths in others (like music and mathematics). Talking about him, one of his teachers even said : "He will never amount to anything". But he is known for his "Everybody is a genius. But if you judge a fish by its ability to climb a tree, it will live its whole life believing that it is stupid." quote.